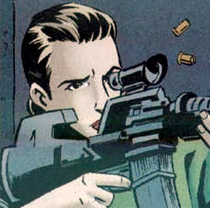 Yedida "Alter" Tse'elon (Hebrew: ידידה "אלתר" צאלון) is a colonel in the Israeli army. Her parents never spoke her first name so as to "deceive the angel of death".[1] She serves as the primary antagonist of the series.

New chief of the general staff for Israel, Alter is the leader of an Israeli commando unit sent to acquire Yorick Brown for her nation and can be considered one of the story's main villains. She faces court martial but manages to escape by convincing her guards to join her and shoot the judge. "Alter" (meaning "old one") is in fact only her nickname; because two of her siblings before her died in childbirth, her parents followed the superstition of never speaking her real name, so that the angel of death would be unable to find her and take her life. When she believes that Yorick is about to kill her, she announces her name as Yedida ("friend"). Alter continuously pursues the last man in an effort to give Israel a strong bargaining position against the rest of the Arab world for what she feels will be an inevitable assault on the Jewish people. She may also be trying to provoke a war in the belief that an external enemy is necessary to avoid internal discord in Israel. However five years after the plague, no attacks on Israel have occurred.

She inspires others to follow her in her quest for the last man, going so far as to forge evidence to motivate her troops. She often tells others that her sister was killed by terrorists, but it turns out that she was accidentally killed by IDF forces while protesting the destruction of Palestinian homes. She kills members of her own unit who question her actions, and is responsible for the murder of Yorick's mother Jennifer Brown and Agent 355. Ultimately, it is revealed that she suffers from survivor's guilt in much the same way as Yorick did, brought about by the death of her sister. Like Yorick, she seeks to end her life through a form of assisted suicide, which she attempts to achieve by joining the military and taking dangerous postings. Following the plague, Alter's quest to find Yorick is shown to be motivated solely by her desire to be killed by him, as she considers him - as the sole remaining man - the only one worthy of doing so. Instead, Yorick knocks her out and leaves her to the IDF troops; her fate following these events remains unknown.