The Day Before
Y: The Last Man is an American drama television series starring Diane Lane, Ben Schnetzer, Olivia Thirlby and Ashley Romans that premiered on September 13, 2021, on FX on Hulu. The series is based on the comic book series Y: The Last Man. In October 2021, the series was cancelled after one season.

Y: The Last Man takes place in a post-apocalyptic world where a mysterious cataclysmic event instantaneously killed every mammal with a Y chromosome but for one man, Yorick Brown, and his pet monkey Ampersand. The series follows Yorick as he traverses the new world as its survivors struggle with their losses and attempt to restore world society, led by Yorick's mother and incumbent U.S. President Jennifer Brown.

On October 14, 2015, it was reported that FX had begun development on a television series adaptation of Brian K. Vaughan and Pia Guerra's comic book series Y: The Last Man. Vaughan was set to produce alongside Nina Jacobson and Brad Simpson. Production companies involved with the series were expected to include Color Force and FX Productions.

On November 14, 2016, it was announced that Michael Green would serve as showrunner for the potential series in addition to writing a pilot script with Vaughan. On January 12, 2017, it was reported that FX was expecting to receive the script in the next few months. On May 31, 2017, it was clarified that Green had solely written the script and that Vaughan had read and liked it. On July 21, 2017, it was confirmed that FX had received a draft of the script from Green, that they had liked it, and that discussions over the potential series were ongoing. On January 16, 2018, FX CEO John Landgraf commented on the series' status during the annual Television Critics Association winter press tour saying, "[We feel] pretty optimistic, not quite at a final decision point. But we got a script I really like, a draft we really like recently." Landgraf went on to comment that Green was now available for the series following his departure from American Gods.

On April 5, 2018, it was announced that FX had given the production a pilot order. Green was expected to co-showrun the series with Aida Mashaka Croal, both of whom were also set to executive produce alongside Melina Matsoukas, Jacobson, Simpson, and Vaughan. Matsoukas was also slated to direct the pilot episode. On February 4, 2019, it was announced at the Television Critics Association's annual winter press tour that the production had been given a series order for a first season, expected to premiere in 2020.

Principal photography for the pilot originally commenced on August 20, 2018.

Filming locations reportedly included Pearl River, New York. In February 2020, it was revealed that production for the series was to begin in April. However, production was suspended due to the COVID-19 pandemic. Filming for the series began in Mississauga, Canada on October 26, 2020, and concluded on July 23, 2021. 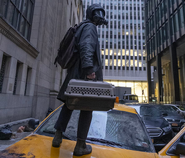