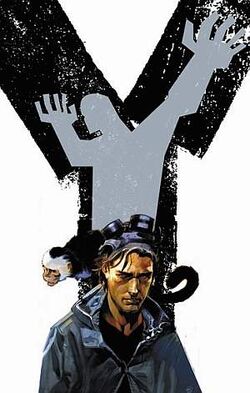 Y: The Last Man is a dystopian science fiction comic book series by writer Brian K. Vaughan and artist Pia Guerra. It was published in sixty issues by Vertigo beginning in 2002, then published as collected editions in ten paperback volumes, followed by a series of five deluxe hardcover volumes. The series, which received five Eisner Awards, follows the adventures of Yorick Brown, the only man to survive the death of every male mammal on earth along with his pet monkey Ampersand.

Retrieved from "https://ythelastman.fandom.com/wiki/Y:_The_Last_Man?oldid=3443"
Community content is available under CC-BY-SA unless otherwise noted.