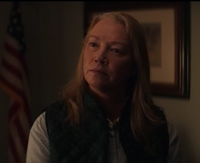 Regina Oliver is a character in Y: The Last Man.

In the FX on Hulu T.V. series, she is portrayed by Jennifer Wigmore.

Regina Oliver is an right wing extremist politician who is anti-immigrant, anti-government, anti-vaxxer, and pro gun rights. She built her political career by building up a following on conservative news and twitter. President Cunningham aligned himself with Oliver because she helped win racist and nationalist votes. It was acknowledged even by moderates in the republican party that putting Regina Oliver in the Presidential Line Succession was one Cunningham's worst decisions. Oliver was attending the CCI summit in Israel when the plague broke out and she was heavily injured. Since Oliver was believed to be dead the succession past to the newly elected Speaker of the House of Representatives Jennifer Brown.