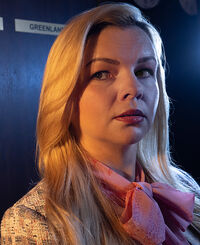 Kimberly Cunningham is a character in Y: The Last Man.

In the FX on Hulu T.V. series, she is portrayed by Amber Tamblyn.

Kimberly Campbell Cunningham is a politically conservative pundit and best-selling author of Boy Mom: Raising Boys in a World Gone Mad & Cancel Culture and the Death of Conservative Dignity. She is the daughter of former President of the United States Ted Campbell, who died in the Global Die-Off. Her mother is Marla Campbell, who by extension, was the former First Lady of the United States until her husband's death.

Kimberly resides in the Pentagon with many of the other women who had been at the government complex when the Global Die-Off killed every living creature with a Y chromosome, with the exception of Yorick Brown and his service monkey, Ampersand.

Kimberly is a staunch opponent of President Jennifer Brown, with political affiliation and conflicting ideology appearing to be the primary motivator (Brown is a Democrat and Kimberly is a Republican). In episode three, she is seen having a conversation with former Second Lady of the United States, Elaine, about how she feels Jennifer Brown has sidelined Republicans from her inner circle and says to Elaine "I just want to know I can count on you if the time comes," possibly hinting to a plot to undermine Brown's presidency.

Upon hearing the news that Cabinet Secretary Regina Oliver was found alive in Israel and will be returning to the United States, Kimberly leads a group of conservatives to ambush President Brown about Regina's whereabouts, status, and questions why President Brown had not told people of Secretary Oliver's survival.

Kimberly also appears to have a fixation on her physical appearance to some degree. She almost always presents herself in elegant and formal clothing, perhaps in an effort to make a show of composure and strength. It may also be a sign she is repressing her grief and emotional trauma, and attempting to maintain a facade of normalcy as a coping mechanism. This fixation is shown when she is able to find a box of drugstore hair dye to color her hair and don an elegant back sweater dress and black pump heels when approaching President Brown about her desire to send a military escort to secure the genetic material at a New York City sperm bank as a looming electrical grid failure threatens the facility.

Kimberly had three sons; Peter, Jack, and Nicholas, and a husband, John, before the Die-Off. The only other surviving member of her family is her mother, Marla, who is seen by many as unstable due to having suffered an implied mental breakdown, presumably, from the loss of her husband, grandchildren, and son-in-law.

In episode five, once Secretary Oliver returns to The Pentagon, Kimberly initiates a private conversation with Regina. When Regina remarks "Your Father won in a landslide, and we still ended up with socialists in charge," Kimberly responds by saying "Except you're here now. People are going to have to pick sides. Rest up, you have friends here."

In episode six, she and Regina share a conversation in front of the memorial wall where pictures have been hung in remembrance of those that died. They discuss how Regina's strength is returning and their mutual dissatisfaction with President Brown.

In episode five, it's revealed that one of President Brown's advisors, Christine, is pregnant. Kimberly and a doctor are the only two who know besides Christine herself. In episode six, Kimberly begins to become obsessive over Christine's fetus, going as far as to say she would be willing to "Raise the baby" after having given Christine a speech about how she believes that God is trying to teach humanity a lesson with the Die-Off and that Christine's baby is a "miracle". Christine appears to be visibly disturbed by the implication and request.

This request and behavior could be interpreted as her desperately trying to get over the grief of losing her three sons by becoming a mother again.

Kimberly is portrayed as somewhat power-hungry and entitled, though also outwardly meek, compassionate, and attentive towards others. She is used to being able to voice her concerns and have sway over her father when he was president. She dislikes that Jennifer Brown is in power, does not listen to her or take her seriously, and especially dislikes she is a Democrat.

Kimberly is staunchly conservative and fiercely pro-life. This is reflected in her obsession with Christine's unborn baby, especially as Christine expresses her doubt about keeping the baby.

Kimberly is also implied and subtly shown to be more depressed and emotionally fragile than she lets on. She has not coped with the death of her family, and especially her sons, very well if at all. In one scene, it's revealed that she has collected a number of children's toys, including things like crayons, a toy car, and colored pencils. She begins to have a breakdown in the bathroom before she is interrupted, where she quickly composes herself. This may be the cause of her becoming, seemingly, more irrational, obsessive, and unpredictable as the series advances.

Kimberly observing her apperance in the mirror.

Kimberly speaking to President Brown about wanting to send a military escort to recover the genetic material at a New York City sperm bank.

Kimberly promoting her books before the Die-Off.
Community content is available under CC-BY-SA unless otherwise noted.
Advertisement