Y the Last Man Wiki
Register
Don't have an account?
Sign In
Advertisement
in: Americans, Deceased, Brown family,
and 3 more 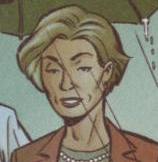 Jennifer Brown is Yorick Brown's mother. She is the congressional representative from Ohio's twenty-second district.[1]

In the FX on Hulu T.V. series, she is portrayed by Diane Lane.

Jennifer Brown is originally the Representative of Ohio's 22nd district (which no longer exists) and mother of Yorick and Hero Brown. From dialog in the first issue, it is indicated that she is in her first term. She is a member of the Democratic Party, but is a strong opponent of abortion. After the plague, she becomes Secretary of the Interior. Believing Yorick has been kidnapped by the Culper Ring she informs Alter Tse'elon of her son's existence, as Israel has the only organised military force at the time. Later in the series, Alter shoots and kills her as revenge for damaging Alter's reputation. 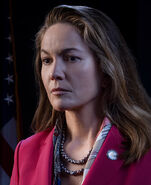