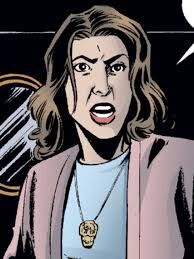 Frozan Hamad is a doctor who is killed in her home thirteen minutes before the plague strikes.[1] She dies wearing the Amulet of Helene. She is the first character in the series to make reference to the theory that "a catastrophe comparable to the Trojan War would take place if [the Amulet was] ever removed from [Jordan]."[2]