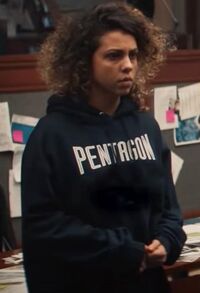 Christine Flores is a character in Y: The Last Man.

In the FX on Hulu T.V. series, she is portrayed by Jess Salgueiro.

Christine Flores is a political operative who works on Representative Jennifer Brown's staff. After the plague she took up residency at the Pentagon and she became Brown's confidante. Flores latter leans that she is pregnant.