In the FX on Hulu T.V. series, she is portrayed by Juliana Canfield.

When the plague hit, she was engaged in anthropological work in Australia. For a time, she is stranded in the Outback, but leaves for Paris after a hallucination that convinces her Yorick is headed there. Her favorite movie is Miller's Crossing. In issue #56, she and Yorick finally reconnect but, in issue #57, after having sex, Beth reveals that she had been planning to break up with Yorick just before the plague hit. Yorick is shocked that he spent five years searching for a woman planning to dump him. Unwilling to believe Beth's love had reappeared in their time apart, he leaves realizing his love for Agent 355.

Before she can go after him, Beth is confronted by Yorick's sister, Hero, who has brought the second Beth and Yorick's daughter, who are then held hostage by Israeli soldiers. At the end of the series, it is shown that Beth and Hero have begun a romantic relationship. 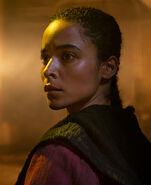