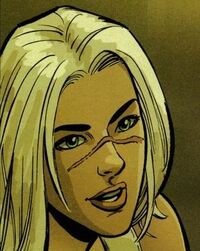 Beth, later Beth Brown, is a former flight attendant who was in the air when the plague hit. She was able to land the plane, but all but three of the passengers were killed in the crash. Feeling guilty over their deaths, she takes up residence in an abandoned Catholic church, where she meets Yorick Brown. The two have unprotected sex, and it is eventually revealed that she is pregnant with his child (an ultrasound shows it to be a girl). Yorick sends Beth a letter by way of his sister Hero, asking Beth to befriend his sister. He feels the two "nutty broads" deserve one another. In issue #44, it is revealed that Beth II has given birth and named her daughter Beth Junior. In issue #60, an adult Beth Jr. reveals that her parents married for the sake of their daughter, but were never able to hide the fact that their relationship was not based upon love.

She is one of the many characters to not receive a legitimate last name, however, she may have taken Brown as a last name after marrying Yorrick Brown.