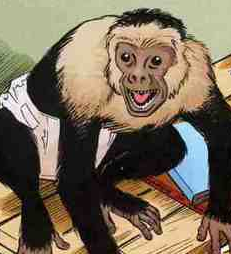 Ampersand is Yorick's Capuchin monkey and the only other male mammal to survive the plague. Yorick is raising Ampersand, a helper monkey who will eventually be trained to help an individual with a severe disability (this scenario is based on the real-life Boston organization Helping Hands).

Yorick and Ampersand develop a close bond, and the monkey also bonds with other characters as well. Yorick states that he named him Ampersand after the symbol & in order to feel closer to his girlfriend Beth as he had thought of them as Yorick & Beth.

It is suggested in Y: The Last Man #30 that Ampersand is a genetic mutation, and his feces are actually the reason he and Yorick survived the Plague.[1] Issue 60 shows an aged Ampersand during a flashback during Yorick's visit to Agent 355's grave. Yorick, not wanting Ampersand to suffer, feeds him a poisoned grape, and Ampersand dies at 355's grave. When the original Yorick is shown in his cell, he is accompanied by many clones of Ampersand, all acting well behaved, and laments, "A hundred monkeys later and they still haven't gotten him right."