Y the Last Man Wiki
Register
Don't have an account?
Sign In
Advertisement
in: Women, Doctors, Chinese,
and 3 more 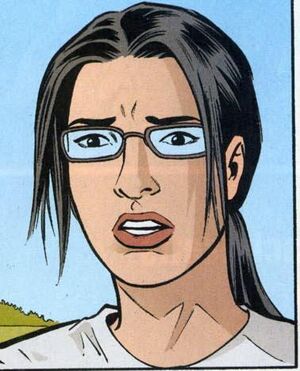 In the FX on Hulu T.V. series, she is portrayed by Diana Bang.

Doctor Allison Mann is an expert geneticist, seeking to discover the cause of the plague and why Yorick survived. When her main lab in Boston is burned down, Yorick and 355 accompany her to her backup lab in California so Mann can recover her notes to help her solve the mystery of the plague. Mann believes she may be responsible for the plague, since it happened the instant she gave birth to her non-viable clone.

She is Chinese and Japanese, and changed her name to Allison Mann from Ayuko Matsumori to annoy her Japanese father. At a young age, she moved to Los Angeles, California with her father. She told her father that she was a lesbian before he left the United States. Her first lover was named Mercedes, and she later develops feelings for Agent 355. Her previous failed relationships (and her parents' unhappy marriage) have given Allison a cynical attitude towards love; she claims at one point that it is a mere biological imperative.

After graduating from UC Berkeley she was given a job at Harvard University. Years later at Harvard, a student named Sunil helped her clone herself. When on board the smuggler ship The Whale, Allison meets Rose, a woman who turns out to be a spy for the Australian navy, and later Allison's girlfriend. Her mother finally finds out that Allison is gay during the "Kimono Dragons" story arc. After it is revealed that Allison's father is still alive, and has cloned her several times, she ultimately kills him. Allison and Rose decide to stay behind and not only work on impregnating Rose with the first of Yorick's clones, but also help her mother raise the multiple clones of herself that her father had created. Due to unforeseen tumors resulting from her attempt to give birth to her own clone, Allison is no longer able to have children herself. She dies several years after Yorick and her part ways but she dies before Yorick can make it back to say goodbye.

She lived on through her clones but as her lover Rose said without her bastard of a father pushing them they won't be the same.