Y the Last Man Wiki
Register
Don't have an account?
Sign In
Advertisement
in: Characters, Women, Americans,
and 2 more

Agent 355 (pronounced "three fifty-five", not "three-five-five", and sometimes referred to by the other characters as simply "three-fifty") is a secret agent who is part of the Culper Ring, a mysterious United States government agency.

In the FX on Hulu T.V. series, she is portrayed by Ashley Romans.

Agent 355 is at least the tenth agent to have that number. She is quite adept with firearms and her trademark weapon is a collapsible baton. She is reluctant to kill, but becomes more cold-blooded after hearing of the death of her childhood friend Agent 711. During the "Widow's Pass" storyline, 355 reveals that she has total recall memory, and during the series appears to quickly and easily remember minute details. Her parents and sister were killed in a car accident when she was young and she was recruited while fleeing a foster home following a fight with two racist boys. When the plague struck, she removed an artifact called the Amulet of Helene from the nation of Jordan. Because the amulet's deceased owner warned that if it was ever taken from its homeland, it would create a tragedy greater than the Trojan War, she has been blamed by some for the plague as well. Once Margaret Valentine takes over as United States President, the agent is assigned to be Yorick Brown's bodyguard.

In issue #58 she admitted to Yorick that she loved him. She then whispered her true name to Yorick, only to be killed moments later when Alter shot her with a sniper rifle. Although her original name is never explicitly revealed, in an interview with Entertainment Weekly, Brian K. Vaughan revealed that there are clues to her name in the series.[1]

On the cover of issue #58, she is depicted making the peace symbol with her fingers. This, added to Yorick's reaction when she reveals him her name, might be hints open to be interpreted as 'Peace' is 355's real name. Also, in issue #60, a grown up Yorick visits the tombstone of the Agent, a tree where the number 355 has been scratched, along with the word 'Peace' right below it.[2] 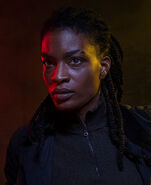